Hyppää sisältöön
Contact
GTK // Blog post // Science Blog: Mineral prospectivity modelling and virtual geologists
The development and use of automated computational approaches to solve geological problems is raising concerns among geologists about the reliability of the computational results. There is currently a lot of talk about machine learning and artificial intelligence, which sounds fancy to some people and terrifying to others. Can a computer program mimic the reasoning of a geologist with decades of experience? Is there a danger that virtual geologists could take over the work of real geologists?

Let’s first briefly discuss the meaning of “artificial intelligence” and “machine learning”. These two terms are used in a variety of ways, often just to make things sound fascinating. When talking about solving geological problems, we should talk about machine learning. It is what we use when we carry out unsupervised data mining to find hidden patterns in data, or supervised data mining to make a predictive model of some feature using a set of known states of this feature. Artificial intelligence is something we try to create, but have not succeeded yet, either for geological problems or for any other problem. If artificial intelligence is defined as “something a brain can currently do better than a computer”, we will never reach it, because every time when we come closer to it, the target moves a little further. Deep learning algorithms could be defined as “artificial cleverness”, since they can adopt to a changing environment, but are still not even close to solving problems like a brain. Deep learning machines are clever, but they are not necessarily wise.

In addition to machine learning, there are a large number of other computational methods for analysing data and modelling events or characteristics. Why do we sometimes dislike using them? An interpretation based on manual examination by an expert may feel more reliable than a computational outcome, because everyone knows how a human brain works. Things we do not understand, and that we cannot affect, naturally make us suspicious. We do not especially like flying in an airplane, even if it is safer than driving a car. We would not all choose to use robot cars, even if the number and severity of injuries would decrease by using automated vehicles. We may feel more confident about interpreting geological phenomena by visual inspection of selected maps and auxiliary information, rather than by feeding the information to a tool that combines it computationally.

Let’s take, for instance, the problem of mineral prospectivity modelling. To manually delineate a prospective area, an expert would take a lithological map, possibly information from drill cores and maybe geophysical or geochemical maps to delineate regions that could be likely to contain a specific type of mineral deposit. The expert would use polygon-type information, since going to pixel scale would be too laborious. The results from the expert’s manual interpretation would provide a map with two or three prospectivity classes (e.g. “not prospective”, “moderately prospective”, “highly prospective”) defined by smooth polygon features. This is the method currently used to identify, for instance, permissive tracts for quantitative mineral resource assessment (Figure 1). The polygons partly follow the outline of lithological units and are partly estimated by the expert, based on the knowledge they have about the mineral system and based on their way of thinking in general. At another time, with another expert team, the tract outline would be different.

In numerous geological applications, computational methods are already in constant use, and their use is becoming more and more common due to improving data collection and modelling techniques and increasing computing power. Today’s and tomorrow’s geologists also are more familiar with mathematics, which increases the acceptance of computational methods. An important co-worker for a geologist today is a mathematical data analyst, who is able to understand the restrictions and capabilities of the tools. There is an endless selection of easy-to-use software for spatial data analysis and statistical analysis, as well as ad-hoc software for specific problems, such as thermal, fluid flow and geological 3D modelling or identification of minerals based on their spectra. The software usually produces nice-looking results, no matter what data are given as input. When used with care, computational software can provide a more informative result than a human interpretation. If not used with care, the results can be nonsense – garbage in, garbage out. When using machine learning or deterministic methods, it is the responsibility of the human expert to insert adequate data and to interpret the results correctly; the computer does not make mistakes.

Returning to mineral prospectivity modelling, a computational approach to the problem would produce a totally different type of result than that generated by human expert’s manual interpretation. In the process of modelling, the expert uses optimisation and conditional, probabilistic and machine learning methods in different stages of the prospectivity modelling procedure. For instance, in Torppa et al. (2019) we computed a prospectivity model for orogenic gold deposits in CLGB using: 1) the Levenberg-Marquardt minimisation method for defining the relationship between the known mineral deposits and the explanatory variables, 2) a self-organising maps machine learning method for finding clusters in the multivariate data set and 3) fuzzy set theory for combining the information in the explanatory variables to prospectivity values. Plus of course a number of simple methods like histograms, point densities and transformation functions to process data and define prospectivity scores. All these computations are contained in the little arrow between the explanatory variable values and the prospectivity map in Figure 2.

Now one can compare the permissive tract obtained using manual interpretation (Figure 1) with the computational prospectivity model (Figure 2). But first of all, how reliable are they? The expert interpretation is affected by the expert’s knowledge and characteristics and the applicability of the input data. The computational model is affected by the applicability of the input data and the restricted modelling capabilities. Both results look good when checked against the distribution of the limited number of known mineral occurrences. However, thoroughly studied test fields are rarely available to validate the model and it is rarely possible to go out into the field and make additional test measurements or observations to check whether the prediction is correct, regardless of whether the model was computed or manually interpreted.

To understand the difference between the results in Figures 1 and 2, we must consider the differences between prospective and permissive. Sometimes we also use the terms favourable and potential. Permissive is defined in quantitative mineral resource assessment as referring to where the geological environment has properties that are favourable for the deposition of minerals. A prospective area is an area where the deposits are most likely present. However, since the definitions differ, the results also differ. What is relevant is that the computational methods used for prospectivity modelling can also be used for modelling permissivity or any other quantity that affects a number of measurable or observable quantities and is known in many different circumstances. What the result represents depends on the input data and the defined thresholds.

Well then, is machine learning or deep learning enough to create a virtual geologist? Considering the above, the answer is “no”.  A geologist is clever and wise, not just clever. However, cleverness is certainly enough for solving many problems. Natural phenomena follow specific rules, and if quantities related to the phenomenon are approximately known and measurable, it should be possible to make valid predictions using only computational methods, even if the relations between the phenomena and the measured quantities are not known. Mineral prospectivity modelling is one example of a complex problem where computational techniques have replaced part of the manual work and increased the information content of the prospectivity map. Is this a small step closer to a virtual geologist? The problem with creating a virtual geologist is perhaps the same as that with creating artificial intelligence: when an algorithm and code is finally created for independently solving a problem that was previously solved by a human, it will be called a software tool. If some day we have an algorithm and code that can solve numerous different geological problems, it will still be just a software tool. So, no virtual geologists. Boring. 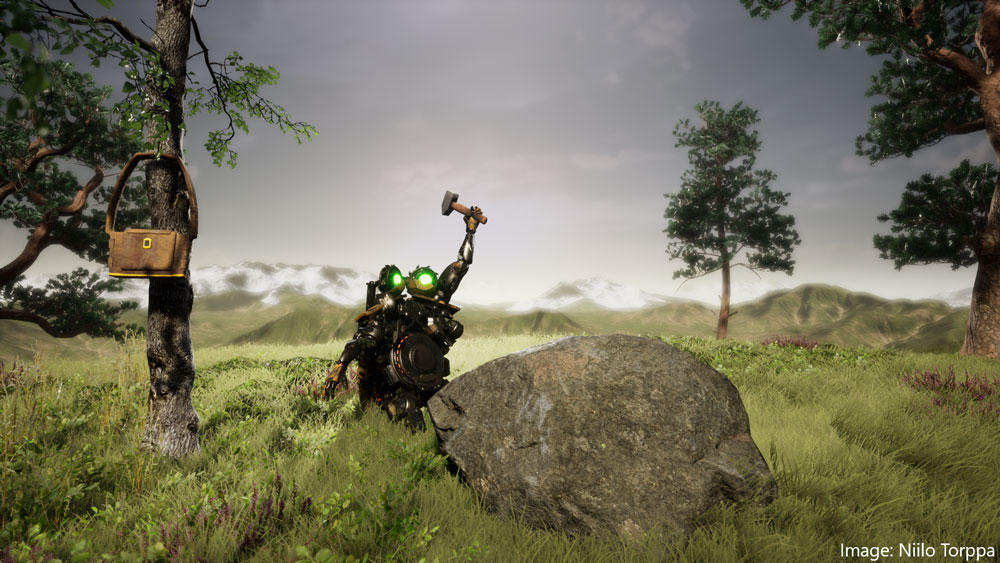 Johanna Torppa is a 44-year old senior scientist at the Geological Survey of Finland (GTK). While completing her PhD degree in astronomy in 2007, she studied the inversion of shapes and rotational properties of asteroids from time sequences of their integrated brightness. After her PhD, she spent eleven years as a freelance researcher, working in biology, astronomy and geology-related projects. In autumn 2018, she became a senior scientist at GTK. She is currently working with mineral prospectivity modelling, software development and hyperspectral data analysis.